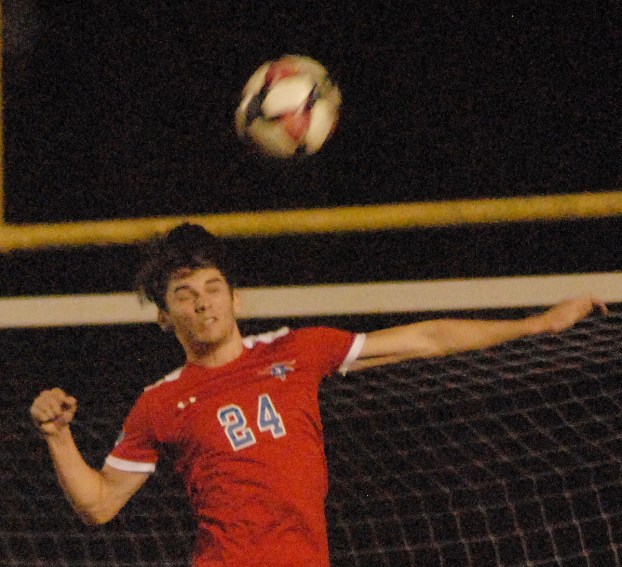 DAILY NEWS PHOTO/Chris Kinkaid Pine’s Ethan Sinopoli heads the ball away that was sent toward the goal by Christ Episcopal in Tuesday’s home game.

Pine’s Raiders fell to Christ Episcopal School, 8-0, in a District 5-IV game Tuesday at home.
Pine got off to a tough start, as Christ Episcopal, which is the third-ranked Division IV team on LHSAA’s powerpoint rankings, scored three goals in the game’s first 20 minutes.
The first came when James Miles tallied into the lower right corner to make it 1-0 four minutes into the game. Miles had two goals.
Luke Croxton made it 2-0 three minutes later and Miles added another in the 20th minute for a 3-0 advantage.
Eli Jones posted another goal just before halftime to make it 4-0 at the break. Jones recorded three goals.
Pine’s defense did a good job early in the second half of keeping Christ Episcopal off the board, but Christ Episcopal scored four goals over a nine-minute timeframe to force the eight-goal mercy rule.
Jones posted the first two in the 57th and 58th minute for a 6-0 lead.
The final two goals were by Ethan Dilliberto in the 64th and 66th minute for the 8-0 final.
“I think they’re first in the district right now. Our guys, they’ve got a big heart, they play hard and they make me proud of them every game that I watch them,” Pine coach Shane Creel said. “They usually keep the frustration down and just give it everything we’ve got.”