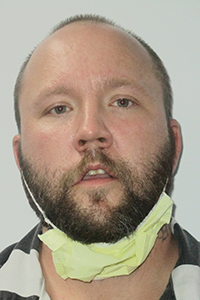 A Mississippi man was arrested Saturday after allegedly stealing numerous items from local mailboxes, according to Chief Deputy Mike Haley of the Washington Parish Sheriff’s Office.

On Friday, WPSO patrol deputy James Gregorio, assisted by Sgt. David Cupp, responded to a complaint from a citizen on Louisiana Highway 60 that mail had been stolen from his residential mailbox, Haley said. The complainant was able to give a physical description of the thief and the vehicle he was driving. The description given matched a previous description posted on social media with a picture of the suspect’s vehicle.

According to Haley, on April 4, WPSO Sgt. Charlie Easterling observed what he believed to be the suspect’s vehicle in a parking lot off of Sullivan Drive in Bogalusa. The suspect vehicle reportedly sped off and Easterling gave chase, heading towards Mississippi.

As Easterling pursued the vehicle, the driver turned off onto a road near the river and encountered a locked gate, Haley said. At that point, Easterling, assisted by patrol deputy Roy Scroggs, took the driver into custody.

“When the driver’s vehicle was searched, officers discovered several pieces of mail in plain view,” Haley said. “The recovered mail contained personal checks and money orders totaling more than $50,000. The intent, according to the driver, was to enter his name in the ‘pay to’ section of the checks and money orders and cash them at local businesses. Apparently, the scheme had been going on for several days both in Washington Parish, Tangipahoa Parish and Mississippi.”

Williams was booked into the Washington Parish Jail charged with theft, possession of stolen property and aggravated flight from an officer. In addition, Williams is out on bond from Tangipahoa Parish and is on probation for other crimes, Haley said. Since postal theft is a federal crime, this case has been referred to United States Postal Service inspectors. It is likely that Williams will also face federal charges, Haley said.

This is the fifth time the Crossroads resident has been in the Washington Parish Jail, beginning with an arrest in 2006. Various charges in the past have included possession of illegal drugs, resisting an officer, public intimidation, assault, convicted felon in possession of a firearm, theft by fraud and other offenses. It is unknown at this time whether or not Williams has been incarcerated in Pearl River County or elsewhere in Mississippi, Haley said.

Any person who has been a victim of mail theft is asked to contact WPSO Detective Capt. Tom Anderson at 985-661-2024 to see if their mail has been recovered.

“This postal thief has relocated to a new ZIP code — namely, 70438, which is the mailing ZIP code for the Washington Parish Jail,” Washington Parish Sheriff Randy Seal said. “He should be quite familiar with his new address, since he has been there several times. Let’s hope he is able to reside at his new home until some wise judge sends him on to the penitentiary.

“I am grateful to all of our officers who were involved in this matter, and particularly to Sgt. Charles Easterling, whose definitive actions resulted in Williams’ arrest. I offer my thanks also to the alert citizen who took a picture of the thief’s truck and posted it on social media.”

The state of Louisiana has surpassed 500 deaths from COVID-19, according to statistics released Monday by the Louisiana Department of... read more