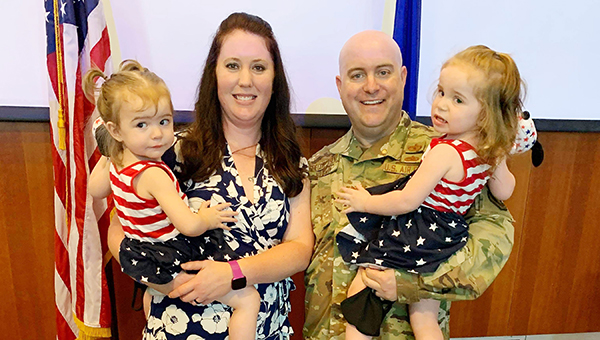 Shown are Gracyn, Ashley, Cody and Kenley Hilburn. Cody Hilburn, a technical sergeant in the U.S. Air Force, recently retired from the military with more than 20 years of service time.

On June 12, a retirement ceremony was held in his honor. During his career he was stationed at Barksdale AFB in Louisiana, Offutt AFB in Nebraska, The Air Force Academy in Colorado, and in Turkey.

For 10 years, Hilburn served as a Jet Engine Specialist. He had the honor of working on the E4B- Advanced Airborne Command Post. He traveled all over the world with the Secretary of Defense during those years.

Hilburn then attended the Air Force Office of Special Investigations training and served 10 years as a Special Agent.

During his retirement ceremony, Hilburn was presented with Certificates of Appreciation from the Air Force and Office of Special Investigations. A special Certificate of Appreciation was presented from President Donald Trump, Commander in Chief. A video message was shown from Gen. John Hyten, current Vice Chairman of the Joint Chiefs of Staff, whom Hilburn served as a member of his personal security detail while Hyten was commander of the United States Strategic Command.

Hilburn was pinned with his Air Force retirement pin by his wife, Ashley. Their 2-year-old twin daughters, Kenley and Gracyn, were present for the ceremony, along with other family and friends. Hillburn’s sister, U.S. Air Force Staff Sergeant Savannah Mayo, from Whiteman AFB in Missouri, was also present. Hilburn and his family will continue to make their home in Papillion, Neb.

The highlight of the ceremony was when Hilburn was presented with a personal congratulatory letter from Ed Orgeron, LSU head football coach. He also received a personalized autographed LSU football and picture of “Coach O” with the national championship trophy.