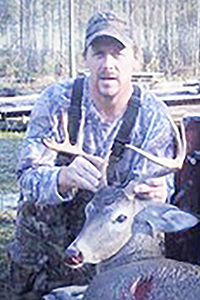 Scott Anthony Lee passed away at his home with all of his family by his side, on June 28, 2020, at the age of 48. He fought a hard battle with cancer, not wanting to leave his family, but his heavenly father had other plans for him.

Scott was born on April 8, 1972, in Bogalusa. He was a mechanic at Lott and Sons Inc. for over 10 years and has been a lineman for AT&T for over 19 years. He was a great son, a loving husband, father, and grandfather and a good friend to many. His life revolved around his wife and children. They enjoyed deer hunting as a family and Scott was always his children’s biggest fan. He was a member of Lee’s Creek Baptist Church.

He is survived by his loving wife of 28 years, Teresa Stringer Lee; his children, Colby S. Lee (Caitlyn), Preston P. Lee, and Alexa G. Lee; and his cherished grandson, Oliver G. Lee, who resides in Pine; his father and mother, Paul A. Lee and Barbara L. Lee; and his paternal grandmother, Louise Blevins; his sister, Heather L. Branch (Steven); and their children, Jacob S. Branch (Kailey), Olivia M. Corkern (Andrew) and their children, Phenyx and Daxton, Taylor N. Branch, and Laci C. Branch of Bogalusa. He is also survived by his brother, Seth P. Lee (Callie) and their three children, Porter, Kennedy, and Prentiss who reside in Monticello; Miss. Scott’s mother-in-law, Juanita Stringer and sister-in-law, Paula Lozier and her children, Trace, Noah, and Collin of Angie.

He was preceded in death by his maternal grandparents, Robert W. Lott and Susie B. Lott; and his paternal grandfather, Porter Buford Lee; and his father-in-law, Butch Stringer.

Services celebrating Scott’s life will be held at Poole-Ritchie Funeral Home & Crematory in Bogalusa on Wednesday, July 1. Visitation will begin at 10 a.m. and continue until the funeral service begins at 2 p.m. The Rev. Keith Sheridan and the Rev. Dennis Allen will officiate. Interment will follow at Lee’s Creek Baptist Church Cemetery.

In lieu of flowers, donations can be made to Lee’s Creek Baptist Church.

“The steps of a good man are ordered by the Lord; and he delighteth in his way” (Psalms 37:1). Normel... read more