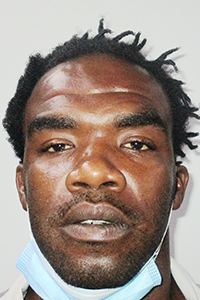 A Bogalusa man was arrested Wednesday on drug charges, after a deputy stopped a vehicle for a traffic stop, according to Chief Deputy Mike Haley of the Washington Parish Sheriff’s Office.

Haley said that WPSO patrol deputy Dalton Manning was patrolling north of Bogalusa on Wednesday, when he observed a motor vehicle violation. The driver of the vehicle was issued a citation, and her passenger ultimately went to jail.

“Due to the strong odor of marijuana present, both the driver and passenger were asked to exit the vehicle,” Haley said. “Sgt. David Cupp arrived to assist and he and Deputy Manning did a pat-down search of each person.

“The search of the passenger, Marcus D. Raine, 35, a resident of Fordham Road in Bogalusa, revealed he was in possession of more than 25 grams of marijuana and other illegal drugs.”

Raine was transported to the Washington Parish Jail and booked on a third-offense felony charge of marijuana and possession of other illegal drugs. His bond was set at $3,500.

“Another drug arrest, more drugs out of our community — that’s what it’s all about,” Washington Parish Sheriff Randy Seal said. “Our narcotics officers, our detectives and our patrol deputies are active in our local quest to rid Washington Parish of as much illegal drugs as possible.

“Any person involved with illegal drugs should be constantly looking over their shoulders for the next available law enforcement officer to give them a free ride to the parish jail.”