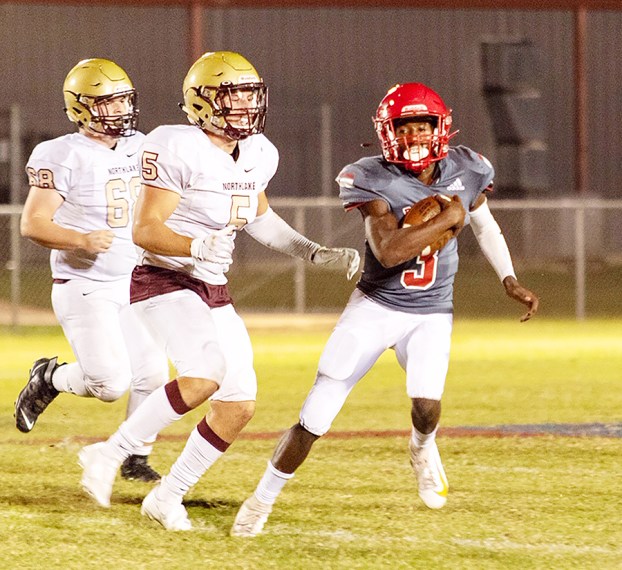 Pine High School hosted Northlake Christian High School on Friday night, winning by the score of 28-7. The Pine Raiders went into the game coming off a loss to St. Thomas Aquinas the previous week. Northlake’s Wolverines came in hoping to add to their 2-0 season.

The Raider offense put three touchdowns on the board in the first half. In the first possession of the game, just four plays in, Pine quarterback Brandon Sprehe handed off to Aurdrlique Dural at the Northlake 24-yard-line. Dural drove up the center of the Wolverines’ defense, broke through and scored. A.J. Warren kicked the extra point. It was good and put the score at 7-0.

The Raiders kicked the second quarter off with a 10-play drive that ended with Sprehe’s hand off to Adrianuen Johnson from the Northlake 23. Johnson broke around the left side and into the end zone. Warren’s extra point was good and put the score at 14-0.

The Raiders regained possession again, after the defense forced the Wolverines to punt before a first down. From Pine’s own 15-yard-line, Sprehe handed off to Johnson. Johnson tore through the defense and ran the 85 yards for another Raiders touchdown. Warren’s extra point was true and the score went to 21-0 with five minutes left in the half.

The Wolverines rallied an answer and pushed back with long drive into Pine territory. From the Pine 5, Northlake quarterback Brantley Taylor pitched back to Jackson Picone. Picone went left and through the Raiders’ defense for the touchdown. Will Murphy kicked the extra point and the score went to 21-7 at halftime.

The second half saw a hardened defense by the Wolverines, though their offense was unable to build on the momentum from the end of the first half.

The Raiders added one final touchdown two minutes into the third quarter. Sprehe scored the last touchdown of the game with a quarterback keeper from the Northlake 1. Warren’s kick was good and the final score was set at 28-7.

The Wolverines attempted to mount a response, but were stopped short when Anterrius Walker intercepted a pass from Taylor. Both the Raiders’ defense and the Wolverines’ defense held for the remainder of the game.

Pine will travel next week to play Independence, in the first district game of the season.

This article was written by John Glover for The Daily News.

Three Franklinton turnovers led to 21 points in a 24-0 loss for the Demons to Jewel Sumner in Franklinton’s homecoming... read more