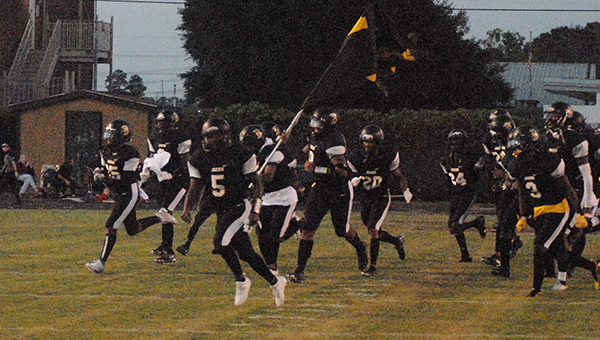 Bogalusa’s Lumberjacks will go back into District 8-3A play on Friday with a home game against Jewel Sumner.

“Sumner is very well coached and very athletic,” Bogalusa coach Adam Brumfield said. “I think the key to the game will be stopping them from running the football. They run the wing T and we have to be able to stop the trap, belly and speed. This takes discipline on defense. We need a big game from our defensive line and linebackers. I think we have the personnel to do it, we just have to execute and do what we have been coached to do. If we go out and do what we want to do, it will be a long night. They are going to try and run the ball and milk clock to limit our positions.”

Bogalusa is coming off of a 28-22 victory over Booker T. Washington on Thursday.

Talik Williams ran for 148 yards and two touchdowns and he caught one pass for 14 yards.

Jarvis Dawson had 33 yards on the ground.

Anthony Turner made three receptions for 56 yards and a touchdown.

Raheem Roberts posted two catches for 51 yards and a score.

“Offensively I think we are starting to execute a lot better and are starting to get over having to take the long break from COVID,” Brumfield said. “I think last week was the first game that we executed well from every position, and to do it against a really good team, was good to see. I thought Ashton Levi showed great presence in the pocket. Our wide receivers made some plays. Our offensive line did a great job,  especially Desmond Johnson and Derek Keating, which allowed Talik Williams to have a great game. He ran really hard. He’s a special kid who’s been waiting for his time for the big game and I knew it was coming. I couldn’t have been anymore proud of him. Now we just want to take that momentum and ride it into the game Friday. Looks like there is a chance that Josh Taylor comes back this week. I think that helps us out as well. We have to figure out a way of working him in at different positions and moving him around. Right now we have a lot of mouths to feed with so many kids playing so well, but that’s a good problem to have. Defenses can’t focus on just one person and they never know who will have the big night.”

Jewel Sumner enters this week with a 5-1 record. The Cowboys are coming off of their first loss of the season after being defeated by Archbishop Hannan, 30-6.

Following Friday’s game, Bogalusa will have one more regular season game left, which will be a road contest against Loranger on Nov. 20.

Varnado came up short to St. Helena on Friday

Varnado was topped by St. Helena College and Career Academy, 28-16, in Friday’s District 9-2A game on Homecoming night. “Once... read more