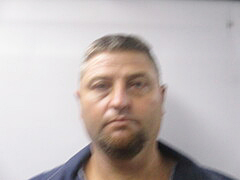 You can’t outrun the radio

Shortly after midnight on Nov. 18, Washington Parish Sheriff’s Office Deputy Randall Garcia was patrolling on Highway 1072 when he observed a vehicle with no license plate. Deputy Garcia activated his emergency lights and siren, but the driver simply increased his speed and would not yield to the patrol vehicle.  After an extended chase, the driver failed to navigate a sharp turn and crashed his vehicle into a bridge railing.

In the dark, and with no other officers on the scene, Deputy Garcia held the uninjured driver at gunpoint until Sgt. Michael Thomas and Franklinton Police Department Officers Jared Stubbs and Brandon Manning arrived for backup.  The driver, Arthur A. Jones, 42, a resident of Bud Slocum Road was removed from his vehicle.  At that time, it was determined that Jones had two outstanding warrants for his arrest.

Jones was transported to Riverside Medical Center for evaluation. Once he was medically cleared, he was transferred to the Washington Parish Jail where he was booked on charges of  aggravated flight from an officer, no insurance and invalid registration, in addition to the outstanding warrants.  During the process, Jones told Deputy Garcia that although he might attempt to outrun the patrol vehicle, he could not outrun the radio.

Jones has previous stays in the Washington Parish Jail. In 2018, he was booked on charges of domestic violence with strangulation, criminal damage, possession of illegal drugs and possession of drug paraphernalia. In 2019, he was charged with home invasion and criminal damage to property.

“The frightening element involved in any chase is that the officer doesn’t always know who is driving or why the person is fleeing,” stated Sheriff Randy Seal.  “It may be someone who thinks he can avoid being stopped or it may be someone who has just committed a felony or who is wanted for felony charges elsewhere. Also, the officer never knows whether or not the driver is armed. There is always significant danger for the officer, especially when he or she is alone. I congratulate Deputy Garcia for a job well done and I extend my heartfelt thanks to the fine officers of the Franklinton Police Department who are always willing to assist us at any time.”