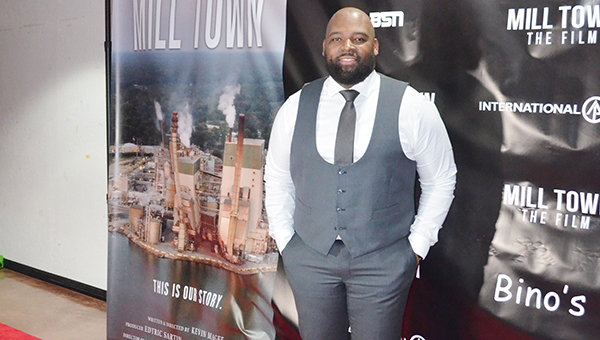 Film maker Kevin Magee stands on the red carpet next to an expanded photo of his movie’s poster.

The movie is now also available online at www.vimeo.com/ondemand/milltown.

Friday night’s premiere was held at the Bogalusa High School auditorium, and it was literally a “red-carpet occasion.” The lobby of the auditorium was decorated with a backdrop and a red carpet, suggestive of a big-time Hollywood movie debut.

Magee, who left Bogalusa in 2010 but still remains appreciative of his hometown, was pleased by the turnout. He expected about 100 people to attend the premiere, although the crowd was limited in size due to the COVID-19 pandemic.

“I’m definitely happy that it happened and went well,” Magee said. “This is something that’s more than six months in the making. I hope I was able to bring something positive to my city.”

Magee, 28, began filming the documentary in August and edited 60 hours of raw footage down to the film’s running time of approximately 75 minutes. He did three to four personal interviews a day, during the first week of that month.

Several of the interview subjects were able to attend Friday’s premiere.

Among them was Amy Adams, who taught Magee in fifth and sixth grade at the then-Columbia Street Magnet School. The now-closed, dilapidated school served as a backdrop for much of the latter third of the documentary.

“It’s really amazing to see what Kevin has accomplished,” she said. “I see so many of my students go on to do great things, and it’s always wonderful when they come back home.”

Adams said that she thought Magee’s film did a good job of showing Bogalusa’s past, but also demonstrating that the city can have a bright future.

Magee thanked his crew who assisted him with the production of the film. Although Magee has produced video projects before — such as commercials and game highlights of Bogalusa High School football. However, this was his first feature-length film.

One of those crew members was Tevvon Hines of Denton, Texas, who grew up in Louisiana. Hines said that his brother went to college together with Magee, and that relationship allowed Hines to get to know Magee. Hines served as an editor on the project, and he and his family drove more than eight hours from Texas to watch the film premiere.

“It was great to hear the positive reactions from the audience during the night,” Hines said. “It was really a good time.”

Magee said that he hoped he could serve as a role model for students in Bogalusa to dream big. He noted that he is only about 10 years older than some of the current BHS seniors.

“It’s not too long ago that I was just like them,” he said. “Going to school, playing football and having fun, and now I’m here showing off my movie. I not only want to show them that they can do something like this, but I also want the young people to know about Bogalusa’s story. They’re the future, and they can help make it even better.”