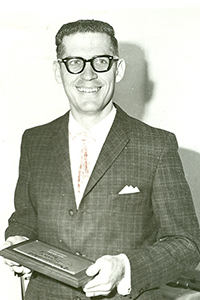 “Against the Klan,” a memoir by former Daily News publisher, the late Lou Major Sr., has been released by LSU Press.

When Major joined the staff of the Daily News in 1950 fresh out of journalism school at LSU, little did he know that only a dozen years later he would be leading the newspaper as publisher during a time of major societal change, at the young age of 34.

He came publisher of the paper in 1963, just as the national civil rights movement was coming to a head across the nation in the middle 1960s, and when Bogalusa and Washington Parish were front and center of national news coverage because of the racist Ku Klux Klan’s vocal and sometimes violent opposition to local black Americans’ efforts to secure equal rights under the law.

Numerous books and scholarly articles have reported those days when many feared that the city was on the verge of a race war, but those writings barely mention The Daily News and the role it played — through editorials written by Major and his direction of the paper’s news coverage of events — in the community calling for racial harmony and upholding the new laws of the land in the Civil Rights Act of 1964 and the Voting Rights Act of 1965.

Those editorials also repeatedly included criticism of the Ku Klux Klan. His first editorial criticizing the Klan, following a series of cross-burnings in early 1964, asked, “We wonder whether these night-riders think of the feelings of children and wives in homes where they planted their dirty flaming crosses. Obviously, they are people without conscience, bent only on spreading fear.”

Becoming the leading public voice of criticism against the KKK was not without risk to Major, his family, and The Daily News.

While local blacks were threatened, intimidated and violently attacked as they marched in Bogalusa’s streets seeking social justice, the Klan also waged a campaign of threats and harassment against Major and The Daily News.

The newspaper and Major personally were regularly criticized in viciously insulting language in the “Midnight Mail” — the unofficial name for periodic flyers published by the Klan and tossed late on Saturday nights onto sidewalks and driveways of many Bogalusa homes.

But Major was not intimidated.

Over a period of two years, he wrote editorials calling for calm in the city and criticizing violence in all its forms during the period of civil rights tension. Of the Klan, he wrote in one editorial: “They need to be exposed to the light of day and shamed for their heinous actions. But more than despised, these people need to be pitied. They have not kept up with civilization. They are throwbacks to a day when rash emotionalism ruled over reason.”

After that time of tension and drama faded into Bogalusa’s past, Major never discussed that period of the city’s and the newspaper’s history publicly during the remainder of his 50-year career at The Daily News. At the urging of friends and family, he finally wrote his memoir after his retirement and only a few years before his death in 2013 at age 82. At the time he was writing the memoir, he was honored by the LSU Manship School of Mass Communication by induction into its Journalism Hall of Fame, in part because of his public stand against the Klan nearly 50 years earlier.

Now, the memoir has been published, as part of LSU Press’ Media and Public Affairs series, after several years of editing and preparation of the manuscript by Lou Major Jr., himself a 30-year veteran of The Daily News.

Major Jr. writes in the memoir’s Afterword that his publisher father occasionally spoke in later years of how the newspaper’s coverage of Bogalusa’s racial strife might have been differed if he had had more experience as publisher of a small town community newspaper publisher at the time.

“He might have paid more attention to why Bogalusa’s black residents felt they had to form the Deacons for Defense,” Major Jr. wrote. “He might have been more understanding about the role that the Congress on Racial Equality was playing on the local blacks’ behalf, rather than criticizing them in editorials as outside troublemakers.”

But one thing that would not have been different, Major Jr. adds, was The Daily News’ strong public stance against the Ku Klux Klan.

In his Foreword to the memoir, Stanley Nelson writes, “Because he chose not to comment on Bogalusa for decades, Major’s decision to recount his work later in life is like uncovering a treasure that has been lost for a half-century, much like recovering FBI documents that shed new light on the era.”

Nelson is the long-time editor of the Concordia Sentinel in Ferriday, and a Pulitzer Prize nominee for Local Reporting for his 2011 investigative journalism in unraveling a long-unsolved KKK murder in north Louisiana. He is also the author is “Devils Walking,” about other Klan murders along the Mississippi River border region between Louisiana and neighboring Mississippi in the 1960s.

More recently, Nelson has conducted his own research for an upcoming book about one of the darkest episodes of that period in Washington Parish — the nightrider ambush in Varnado that resulted in the 1965 death of O’Neal Moore and the wounding of Creed Rogers, the parish’s first two Black sheriff’s deputies.

In the Foreword to Major’s memoir, Nelson writes: “I have looked over thousands of front pages of the Daily News from the late 1940s through the late 1960s. Major’s coverage of the Civil Rights era in Bogalusa was exemplary. In my view, there was no other editor or publisher in Louisiana, and only a few in the South, who displayed such courage, integrity, and morality in the face of deadly adversity and such life-altering social advances. Lou Major’s work should be taught to students studying journalism and community newspapers in Louisiana.

“The memoir is fresh and exciting. (It) moves at a good pace, and is an important account of Louisiana history, civil rights, the South, race relations, journalism, and the value of an outstanding newspaper publisher and editor in a community where one is vitally needed.”

The memoir is available for order from Amazon.

The Bogalusa School Board approved a new two-year contract for superintendent Lisa Tanner, during Thursday’s school board meeting. The contract... read more