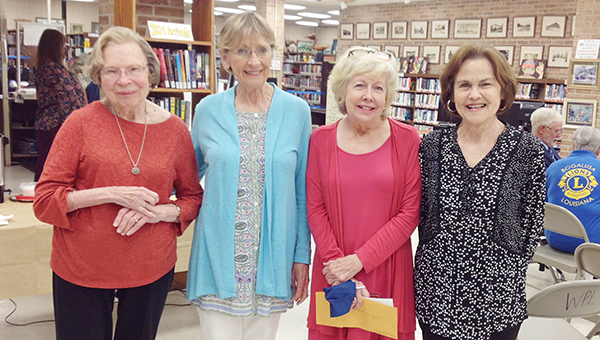 On Thursday evening, the Washington Parish Library had cause to celebrate a number of exciting events that have recently taken place. One of the most auspicious was the celebration of the 75th anniversary of the library. The state’s proclamation of the anniversary was issued by Lt. Gov. Billy Nungesser and read by Library Director Al Barron. Locally, the proclamations were read at a Washington Parish Council meeting in Franklinton and at the Bogalusa City Council meeting. Thursday night, Bogalusa Mayor Wendy Perrette was on hand again to read the proclamation previously signed by her. Coinciding with the library’s anniversary was the celebration of the 100th birthday of Mrs. Helen Dykes Peck, who was the first director of the library.

A very special event took place that night when the Washington Parish Library Board of Control added a new board member. Kewanda August, who is also the principal of Central Elementary School, was sworn in by Judge David Duke.

Another event worth celebrating was the Bogalusa Lions Club’s donation of $1,000 to nine-year old Hunter Young of Bogalusa, who was nominated to attend The National Youth Leadership Forum: Pathways to STEM (science, technology, engineering, and math). This event is open to outstanding students who aspire to work in the STEM fields. The Lions Club’s donation will help with the costs of attending the forum, which will be held in Dallas, Texas, this summer.

Being a very generous, community-minded organization, the Lions Club also presented Barron with a donation of $1,000 dedicated for the purpose of assisting with the costs of various programs at the libraries.

The library also recognized one of its own on Thursday night. Mrs. Etta Magee, assistant director and technology administrator, was awarded the Certificate of Excellence for her 28 years of service to the library.

A very dedicated employee of the library, Magee has steadily worked her way through the ranks and has held every position in the library including interim director. She was instrumental in getting the library into the age of technology, with the advent of computerization, and continues to do so as technology is ever evolving.

A notable presence attending the celebrations was the officers of the Friends of the Washington Parish Library, an organization that exists for the sole purpose of providing financial assistance to the library to help fund programs for patrons of all ages. The contributions from the Friends organization enable the libraries to provide drinks, snacks and activity materials for the children’s programs, as well as other programs.

Memorial Day was established as part of America’s culture by an act of Congress, out of respect for and in... read more