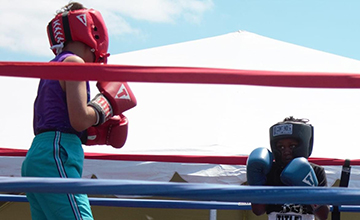 COURTESY PHOTO/Allie Forbes Local boxer Dominic Peters (wearing the blue gloves) competes at the Rumble in the Dungeon that was held in early May at Kelly’s Youth Training Center. Peters won his match by decision.

‘Rumble in the Dungeon’ was a success

Kelly’s Youth Training Center, which is a boxing and strength training facility in Angie, held the “Rumble in the Dungeon” in early May.

The outdoor event had 15 bouts, with participants ranging in age from 8 to 30.

“Everything went great,” Kelly’s Youth Training Center Owner Howard Kelly said. “We had a lot of participation and a lot of visitors from out of town and other camps. They were very pleased. Everything was set up according to the diagram that the USA Boxing Association approves. We had fans, a host of medical personnel, security and we had the support of Pride Hope Ministry, coaches and trainers. The weather was great. The temperature was around 93, 94 degrees. It was a very successful event. We had a great turnout. There were over 400 people between the boxers and the fans. There were no serious injuries. Our local fighters from Kelly’s Training Center participated. We had some winners from the camp.”

Kelly appreciated everybody who came out and supported the event.

“On behalf of Kelly’s Youth Training Center, we want to thank everybody for coming out and supporting our youth. We are looking forward to hosting more events in the future,” Kelly said.

Three of Kelly’s boxers fought in a national event in Biloxi from May 14-16 at the WBC Green Belt at the Sugar Bert Boxing Tournament.

Dalcour and Rayleigh Forbes were unopposed. Peters was defeated in a decision to the No. 4 boxer.

The center is inviting the youth to join. They also offer adult training. 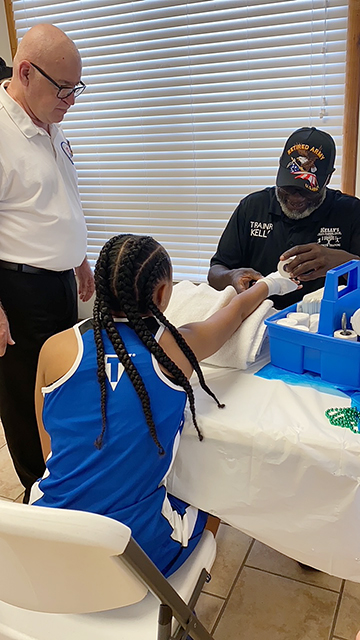 Pine Raider basketball camp is in June The Pine Raider Basketball Camp will be held June 9-11 in the Pine... read more