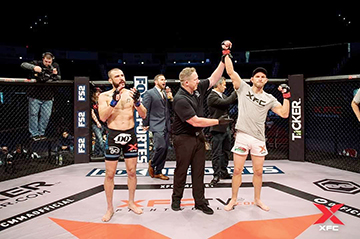 COURTESY PHOTO/Mikhail Valentin Mixed Martial Arts Fighter Kurt Holobaugh, a Franklinton resident, stands with the referee after winning his fight on May 28 to move on to the finals.

Holobaugh headed to the finals after winning last week’s fight

Mixed Martial Arts Fighter Kurt Holobaugh punched his ticket to the championship round quickly in his bout on May 28 in Des Moines, Iowa.

Holobaugh, who has been a Franklinton resident since April of 2020, won by knockout just 11 seconds into the second round.

“I hurt him in the second round. The guy was tough, very skilled and very tough. I hit him with a big knee at the end of the first round as the bell rang. The referee could’ve stopped it, but he let it go to the second where it only took 11 seconds to get the knockout,” Holobaugh said.

Holobaugh said his opponent was able to get up and make it to his corner.

“It was a good fight for me,” Holobaugh said. “I knew I liked his style because I was able to put a lot of pressure on him. I didn’t worry about him shooting for takedowns and interrupting me from putting that pressure on him.”

Holobaugh said that it meant a lot to him that he had his 10-year son, Zayden Holobaugh, with him in the back holding pads and warming him up. He said his son walked him out and helped out the corner.

Holobaugh fights in the Xtreme Fighting Championships where he is in the Lightweight Division and he is in a tournament. There is also a Welterweight Division.

He has won his first two matches and will fight for the title. His title fight is TBA.

“It’s super exciting, especially since I was able to go through and win two fights to get to the finals. The guy I’m fighting was a replacement and only had to win one,” Holobaugh said.

This is the second time Holobaugh has competed in this format. He fought in this format in 2015 in Russia where he was defeated in the first round.

‘Rumble in the Dungeon’ was a success

Kelly’s Youth Training Center, which is a boxing and strength training facility in Angie, held the “Rumble in the Dungeon”... read more