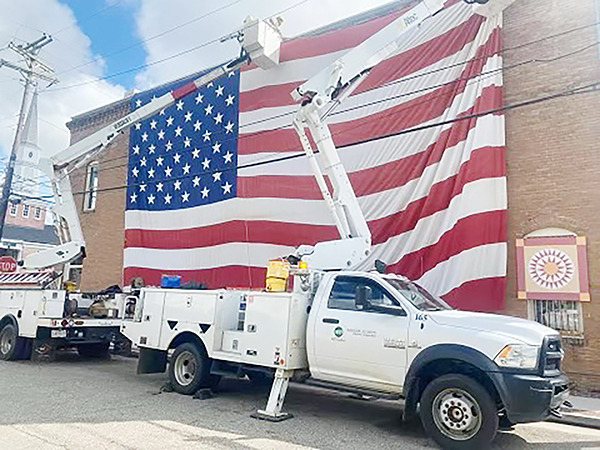 Employees with Washington-St. Tammany Electric Coooperative help to hang a massive American flag on the Cleveland Street-facing side of the Varnado Store Museum earlier this month, in time for the Fourth of July celebration.

It recently took the cooperation of several groups and individuals volunteering their time and expertise to accomplish the hanging of a giant American flag on the Cleveland Street side of the Varnado Sore Museum.

The suggestion to hang the flag was made by Commander Donnie Kuhn of the American Legion Post 24, whose mother owned and donated the flag many years ago. It was previously hung in the same location a long time ago when the museum was first established. Museum officials wanted it up in time for the Fourth of July. On July 1, the people and plans came together.

Donnie Kuhn, Gary Rushing and Phillipp Bedwell of the American Legion Post 24, and volunteer, Mike Rayborn, all of Bogalusa, came to assist in getting the flag hung. Wayne McElveen and Terry Seal, from the Museum Board, were there to coordinate the effort.

Arguably the most important of the groups were the men from Washington-St. Tammany Electric and their bucket trucks. The men had to ascend to the roof to secure the top and rope it in place.

A special thanks goes to the WST crew, consisting of Skipper Crawford, Calvin Dufrene, Eric Williams and Brian Miller, who formulated and carried out the plan to suspend the flag from the roof. Ken Wheat of the Washington Parish Council sent sand bags to secure the top and bottom. The Franklinton Police Department saw to the supplying the barricades needed to block off the street while the operation was underway. At the end of the process, Museum Director, Terry Seal, led all those present in reciting the Pledge of Allegiance.

Museum officials are grateful to those who assisted and hope that the flag reminds all who see it of the importance of patriotism and the freedoms established by our Constitution.

It will also call attention to the museum’s July through August exhibit, “Community Heroes Through the Years.” The museum is open on Saturdays from 10 a.m. to 4 p.m. and on Sundays from 1 p.m. to 4 p.m., with the exception of holiday weekends. Plan a visit soon with your family to view the changing exhibits.