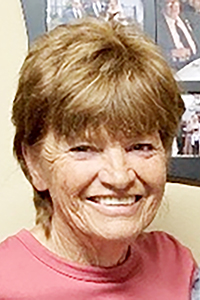 She was born the youngest of 10 children to William and Lennie Terrell on June 7, 1953.

She married Eugene “Blue” Martin, high school sweetheart and love of her life, on June 19, 1971. They had two daughters, Amy and Amanda, and three grandchildren, Andrew, Will and Matthew. When Blue passed earlier this year, Brenda was heartbroken. Her family finds comfort knowing they are now reunited.

Brenda was a devoted wife, mother and nana. She was always there for her girls, and they knew she loved them. Her grandchildren would often argue over who her favorite was, though she swore she did not have one.

She was kind, loving and stubborn as a bull. She always tried to help others. She made great pound cake, drank out of red Solo cups and never needed anything she could not find at Dirt Cheap. She never used a dishwasher, ate off anything other than paper plates or got her hair wet, unless chasing a misbehaved grandchild into the pool.

She played basketball and was a cheerleader while in high school. She worked for the Council on Aging Meal site in Pine for many years and enjoyed her job.

Visitation was at Poole-Ritchie Funeral Home on Tuesday, Sept. 21, from noon to 3 p.m. until time for the Celebration of Life Funeral service at 3 p.m. A graveside service followed at the Pine First Baptist Church Cemetery.

Martha Ann Wallace Magee and Len B. Magee, married for 70 years, passed from this Earth into Jesus’s arms one... read more