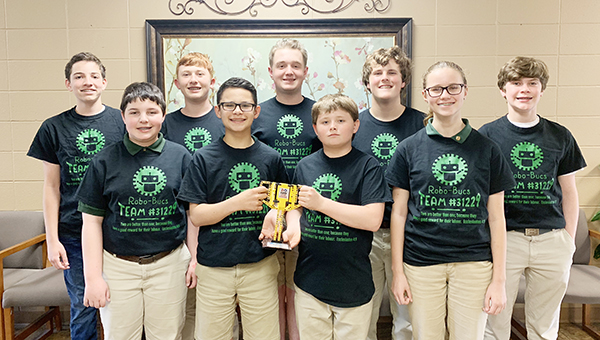 The Bowling Green Jr. High Robotics team, “The RoboBucs,” recently was honored with an invitation to compete in the First Lego League Legoland (FLL) Open International in Carlsbad, Calif. The competition is scheduled for May 14-18, although it is not clear how it might be affected by the COVID-19 situation.

The BGS team was the only Louisiana team to receive this coveted invitation. This honor was earned by the team competing against 60 other teams in the First Lego League State Robotics Competition at Jesuit High School in New Orleans. At the competition, the RoboBucs won first place in Robot Design, and received the fourth-highest score in the Robot Game.

Robotics competitions foster scientific and mathematical reasoning, critical thinking and computer programming skills. These valuable skills prepare students for future careers in the STEM field, a career field that is growing faster than any other field today.

The national competition has four parts: Robot Design, Robot Game, Core Values and Innovative Project. For the Innovative Project portion of the competition, the team chose to use the playground at the Washington Parish Fairgrounds. They had to research and present their ideas to refurbish and improve the playground. The team was able to present their project to the Executive Committee of the Washington Parish Fair Board, and a group of concerned citizens. The team was invited to attend the board’s meeting on Jan. 6, to present the project.

The RoboBucs also recently received a grant from International Paper in Bogalusa. With these funds, they will expand the existing FLL program by purchasing additional robot kits and computers. They would like to also use some of the funds for implementing a new high school program, First Tech Challenge.

On Saturday, March 14, the kids at the Franklinton Branch Library had a blast with St. Patrick’s Day-themed stories read... read more