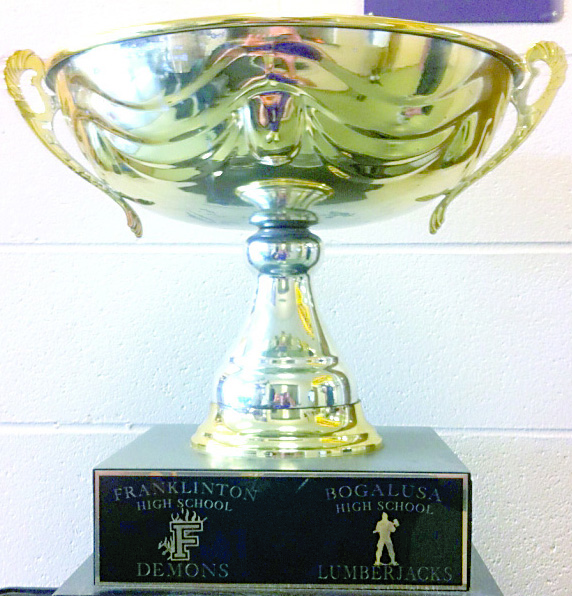 Bogalusa and Franklinton face each other on Friday for the Pine Burr Trophy at BHS.

Rivalries meet Friday night when Bogalusa hosts Franklinton to open the 2020 season, as the teams battle for the Pine Burr Trophy.

“In order to have a good rivalry the other team has to win every now and then,” Bogalusa coach Adam Brumfield said. “I think the win last year will make the game way more intense this year.  I respect that school, their coaches and players and I know they will be ready to play. Taking care of the football and special teams I think will be the key to winning the ballgame. If you’re a high school football fan in Washington Parish, Bogalusa will be the place to be Friday.”

Last week was scrimmage week for both teams, as Bogalusa traveled to Fontainebleau and Franklinton hosted Covington.

“It is a very long-standing rivalry that I have been fortunate to be a part of for many years,” Franklinton coach Jonathan Barber said. “The games are typically competitive, and there is a certain excitement from the community unlike any other game of the year. Our players understand the importance of the game, but more importantly they want to start the season out on the right foot. It is obviously a big game, but talking about the game will not help us be successful. We have to have a good week of practice with some intensity and high level of focus. Our goal is to improve everyday and that won’t change our approach this week. We look forward to the opportunity to compete in this ongoing rivalry.”

Franklinton comes off of a 6-4 regular season. The Demons were defeated by George Washington Carver, 34-23, in the opening round of the Class 4A postseason.

Bogalusa went 3-7, but posted a 2-3 record in games decided by one possession.

Both teams are at home for week two on Oct. 9.

Pine and Albany played to a 21-21 tie in a scrimmage held on the road Friday. Pine coach Bradley Seal... read more