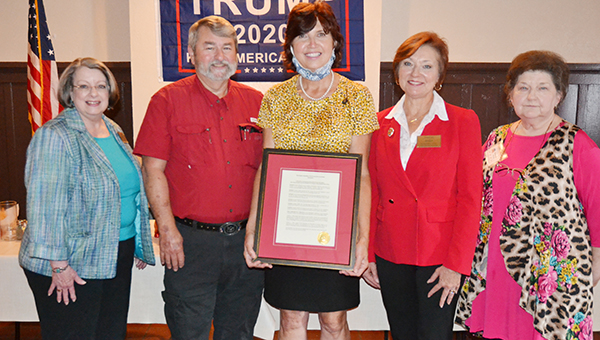 At a recent Washington Parish Republican Women (WPRW) meeting, a resolution honoring and commending State Sen. Beth Mizell upon being elected to serve as President Pro Tempore of the Louisiana State Senate during the 2020 Regular Legislative Session was presented.

Mizell was elected by her peers to become the first Republican woman ever chosen to serve as President Pro Tempore of the Louisiana State Senate and was elected to become an “at-large” member of the Senate Republican Caucus, representing Senate Districts 1-13 of Louisiana.

Mizell became the first woman and the first Republican woman elected to the Louisiana State Senate from Washington Parish and was overwhelmingly elected to serve a second term as Senator, due to the attention to the needs of her District and State.

The resolution was declared to be adopted upon the unanimous vote by the Washington Republican Parish Executive Committee, acting as the official agency of the Republican Party in Washington Parish.

The beautifully framed resolution was donated by Everette Watson Framing.

On Sunday, the Rayburn Correctional Center canine team captured a suspect who had fled from a Washington Parish Sheriff’s Office... read more